By afewmoreyears
April 19, 2017 in Equipment 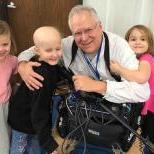 I took my 664 and gave the client a choice. We could lav everyone and I would be less mobile or we could boom and use one wire. He took the smaller package and he was confident in my ability after see

What I do is use regular linking on channels 1-2 and a custom headphone preset to monitor 1-2 with M/S decoding. That way I listen to the decoded signal on site but the isos are recorded raw for the m

Very very curious about this, and potentially very very excited, too.  Especially if they‘ll add more interfaces, or better yet, open up the protocol for anyone to develop a controller