How to hide a Sennheiser ME 2 on talent

I never had trouble using a typical mole skin sandwich. Just keep trying, you'll figure out a technique that works. 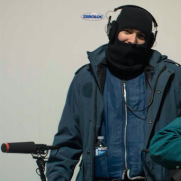