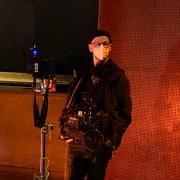 The 833 offers quite a lot for it's price and was never intended to replace any of the bigger recorders. It still can be paired with a CL-12 and a lot of MCU controllers which are a lot cheaper compar

I believe now amongst the various manufactures the price points have come much closer together than in past years.  Yes feature sets differ, but the end is we are all benefiting.   After many yea

I agree, purchased the 833 just before the 888 was announced, and although it is fine for my needs now, had assumed all the "8" series goodies would be compatible.  Had I known of the new CL16 not bei